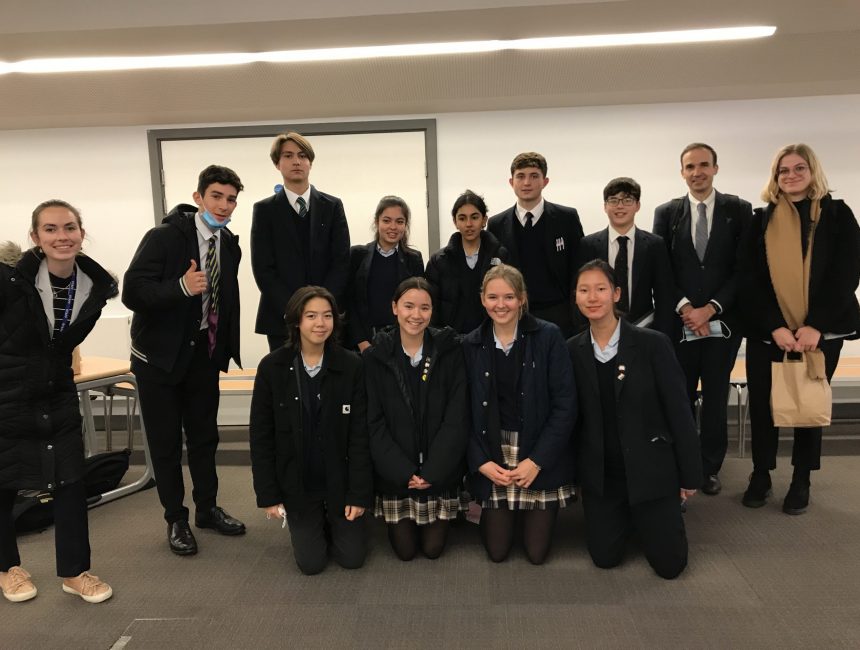 25 November marked a day of victory for Haileybury pupils in the Modern Foreign Languages competition. Snappily called the MFL, the annual competition sees Year 11 pupils from across schools come together to compete in debates in French, German and Spanish.

Held once a year, the MFL is a team debate competition which this year was held at The Perse School in Cambridge, involving Haileybury, the Stephen Perse Foundation and Bishop’s Stortford College.

The competition consists of four rounds for each language, putting pupils’ language skills to the test during debates around subjects like the pros and cons of mobile phones, towns versus the countryside, and the advantages and disadvantages of uniforms.  In the final rounds, teams were asked to prepare arguments for and against a given motion. A coin was then flipped to determine which team started the debate.

Each team performed exceptionally throughout all rounds, yet it was Haileybury’s French team that brought home an unequivocal victory for the School on the day.  After winning the first rounds, the French team members went through to the final with the challenge to compete against Perse School in an unseen motion. The topic set was: ‘We must ban alcohol for people under the age of 21’, and fifths pupils Constanze and Martha won the final round.

Constanze from Lawrence summed up, “I found the MFL debating competition a great experience and something completely different from a normal French lesson. There were debates including the ban of screens for under 12-year-old children as well as about the importance of learning foreign languages besides English.”

Martha from Albans added, “Overall, I thoroughly enjoyed my experience during the build-up to the competition and the debate. Before the competition, I was able to discuss topics that are relevant today with Constanze and Ms Sainte-Croix.

I also found that this improved both my written and spoken French, which will be beneficial for GCSEs in the summer. The competition was something that was outside of my comfort zone, so I was initially nervous, but I enjoyed the debating once I had settled in. I would be love to participate in something similar to this in the future.”

Strong representation across the MFL teams

Although the French team won, both the Spanish and German teams did Haileybury proud, with eloquent and persuasive debating skills in their chosen languages.

Lorna Jones Head of German commented on the experience, “The pupils represented the School very well, especially the French team who came back victorious after winning the ‘unseen motion’ in the final!”