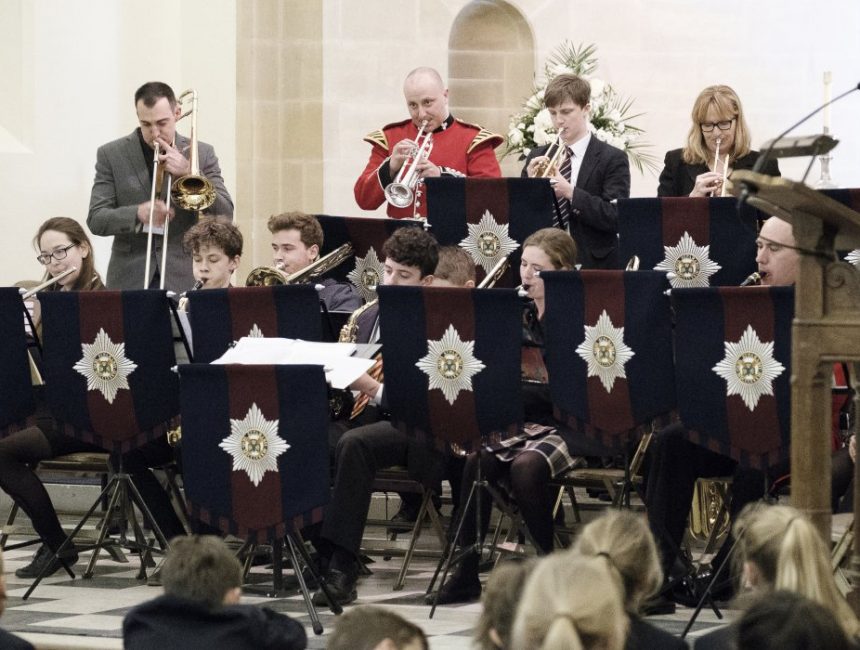 Pupils had the chance to take part in a masterclass with the world-famous Regimental Band of H.M Irish Guards last month.

The Band members took time out of their busy schedule to hold a masterclass with some of our most talented brass and wind players in Bradby Hall.

This was a unique opportunity for the pupils to learn from and be inspired by the musicians, who shared their experience and helped to coach them.

Members of the Band also gave a talk about what life is like as a musician in the army.

This was followed by a spectacular evening concert in Chapel for pupils, parents and members of the public.

The Regimental Band of H.M Irish Guards, led by Bandmaster Andrew Porter, played a variety of pieces including March of the Resistance from Star Wars.

Our pupils also had the chance to perform alongside the Band, putting into practice what they had learned earlier that day in the masterclass.

One particularly special moment of the concert was the Band playing Hubert Parry’s I Was Glad alongside Haileybury’s Chapel Choir and Choral Society.

Andrew O’Brien, Haileybury’s Director of Music, said: “We feel privileged to have welcomed such an inspirational and internationally renowned group of musicians to inspire the next generation of musicians at Haileybury.”

The Regimental Band of H.M. Irish Guards is one of five Guards Bands tasked with providing musical support for State and ceremonial occasions, and to the wider British Army.

Regular duties included Changing the Guard at the various Royal Palaces, Trooping the Colour on Horse Guards Parade and the Cenotaph Parade at Whitehall.