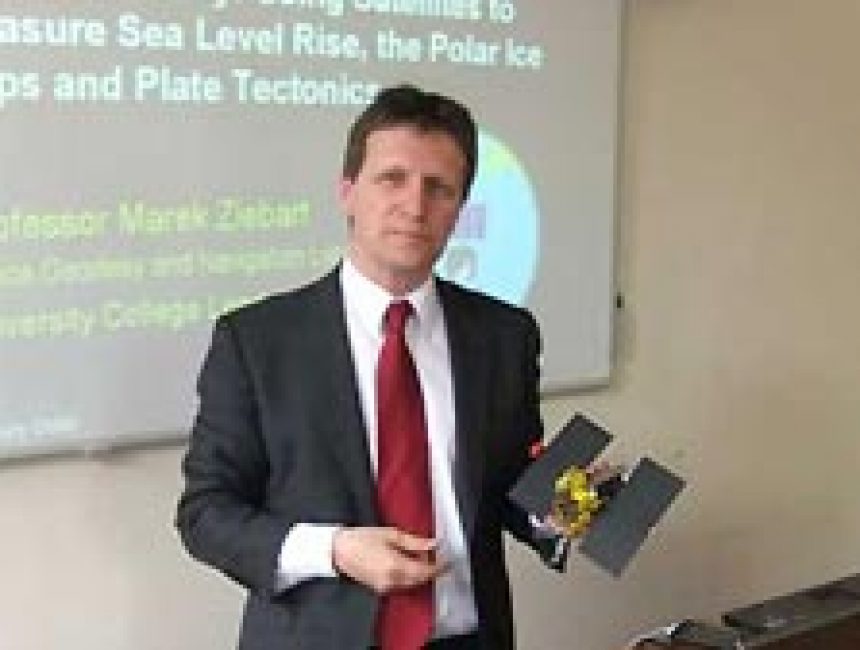 On Friday 13 May, the pupils of Haileybury were treated to another lecture as part of the Science Department Lecture Programme. The guest speaker was Professor Marek Ziebart of University College, London.

Professor Ziebart is a professor of Space Geodesy, which is the science and engineering of using satellites in orbit around planets to measure various characteristics, such as the strength of the planet's gravitational field, variations in the Earth's sea level and the area of polar ice caps, as well as tracking the movement of tectonic plates. All of these areas of research have great benefit to mankind.

Arguably the most important use of satellites is the Global Positioning System (GPS), which is used for navigation and positioning by millions of people world-wide and is operated by the United States Air Force.

Professor Ziebart was responsible for deriving a formula that could be used to calculate the forces that act on satellites in orbit above the Earth. These forces include the gravitational attraction of the Earth, the Sun, the Moon and other the planets in the solar system. Other important forces are due to the continual bombardment of the satellite by 'packets' of electromagnetic radiation, called photons, from a variety of sources, most notably the Sun. Once these forces are known, steps can be taken to ensure that the satellite remains on its orbit, carrying out the functions that is has been designed for.

This work led to an invitation for Professor Ziebart to present his work to the Jet Propulsion Laboratory team at NASA. His work was ground breaking and he has since been offered a post on the Governing Board of NASA. He is also a frequent visitor the United States Air Force Satellite Control Centre in Colorado Springs, Colorado.

Professor Ziebart recounted how he grew up in a small village which had no street lights, in northern Wales. It was the lack of light pollution that enabled him to observe the night sky and to marvel at its beauty and sophistication. Out of this grew his love for science and his quest to find the answers to various questions that he wondered about.

Professor Ziebart highlighted the numerous opportunities that our pupils have with a number of universities ranked in the top ten worldwide being within thirty miles of our campus and accessible to those that have a real desire to attend these institutions.

Marek Ziebart is Director of the Space Geodesy and Navigation Laboratory and Vice Dean for Research of the Faculty of Engineering Sciences at University College, London.

He is a contributor to news items and documentaries on BBC Radio 1, BBC Radio 4 (Today programme), BBC Radio 5live, BBC News 24 and the World Service.

He has carried out consultancies and research contracts for a number of institutions, including the UK Hydrographic Office, the European Space Agency, NASA, US Air Force and Ordnance Survey.

We are grateful to Professor Ziebart for taking time out of his busy schedule to visit Haileybury. We are also indebted to Ann O'Bryan of the Chemistry Department for getting in touch with Professor Ziebart and organising the lecture.