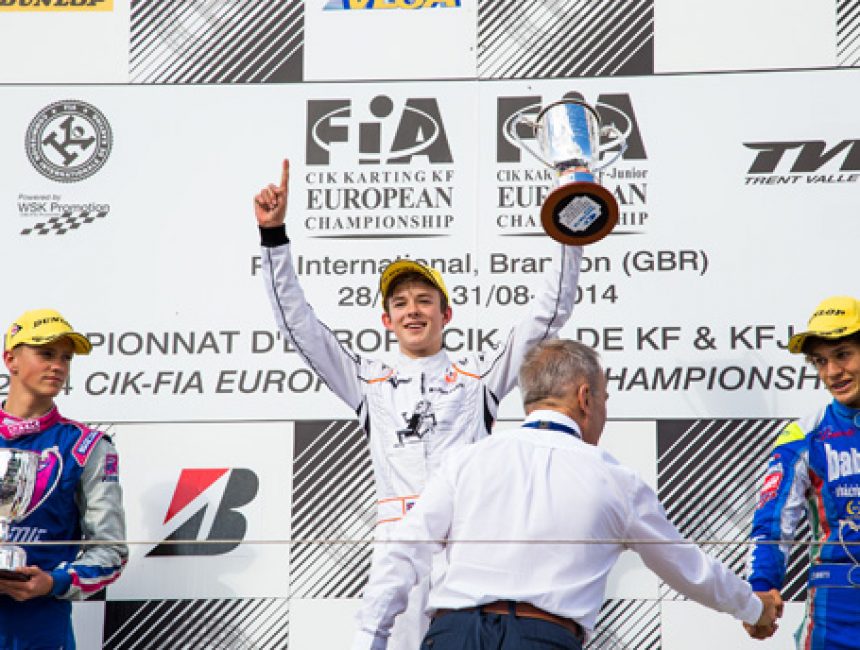 Congratulations to Haileybury pupil Callum Ilott (Bartle Frere) who raced to victory on Sunday, winning the final round of the CIK-FIA KF Championship to become the overall European Champion.

Callum, 15, outshone the competition throughout the weekend dealing well with the wet conditions in qualifying and showing great speed in the dry heats and finals. Starting the weekend 9 points behind the championship leader, Callum then won two of his four heats and the Prefinal with a clear lead. From pole position in the final, Callum was able to take the chequered flag 1.8 seconds ahead of title contender.

This victory, coupled with the win at the first round of the championship at La Conca, Italy in May and a podium at Genk, Belgium took Callum’s overall championship points to 99 out of a possible 105, ahead of Nicklas Nielsen with 89 points, and Lando Norris with 64.

"Becoming European KF Champion was my goal at the start of the year and I am very pleased," says Callum. "As always, I am grateful to the people who have helped me achieve this result."

"Callum is a very special talent and he richly deserved this title blending searing pace and strategy throughout the championship," says Strakka Racing's Team Principal Dan Walmsley. "Callum is intelligent and fast and we are privileged and proud to be working with him to win this title against some very strong drivers."

Ian George, Haileybury Director of Sport: “Callum is one of an increasing number of extremely talented drivers we have in the school at the moment. We are very proud of what he, and the others, are achieving in the Karting world. For Callum to win the European Championship is a fantastic achievement and one he has worked very hard to achieve. We look forward to lots more success for Callum in the future.”

Haileybury will continue to follow Callum’s motorsport progress and support his GCSE studies alongside a busy racing schedule. Callum already sat his GCSE Mathematics a year early, achieving an A grade.

Everyone at Haileybury wishes Callum the best of luck for the 2015 season.