Past and present; a brief history of Haileybury in Country Life magazine - Haileybury

Past and present; a brief history of Haileybury in Country Life magazine 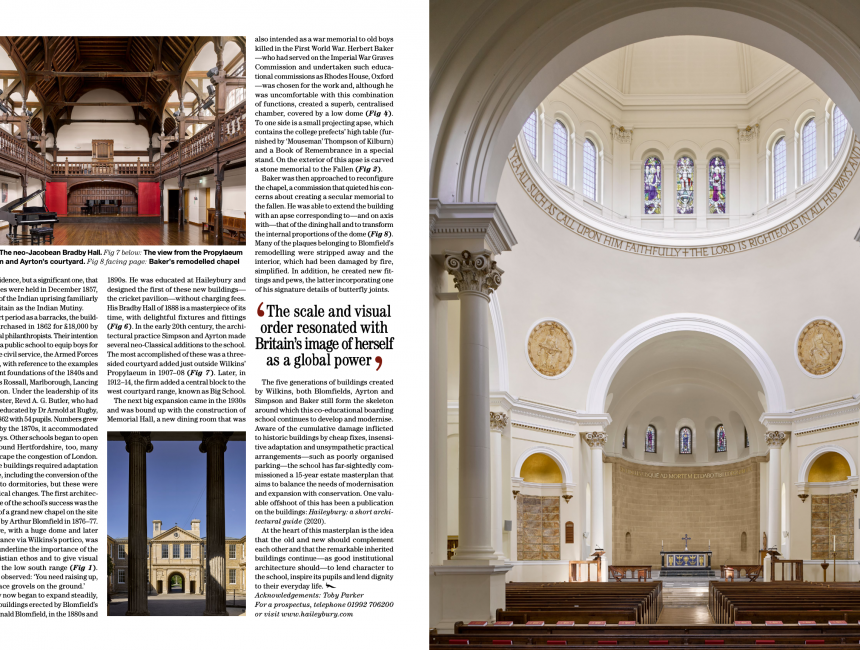 Haileybury has been featured in this week’s issue of Country Life Magazine. Driven by Governor Tim Page-Ratcliff and Director of Learning and Research Toby Parker, the article provides an in-depth insight into the history of the School, grounds and how the site became a place that many of us know and love. 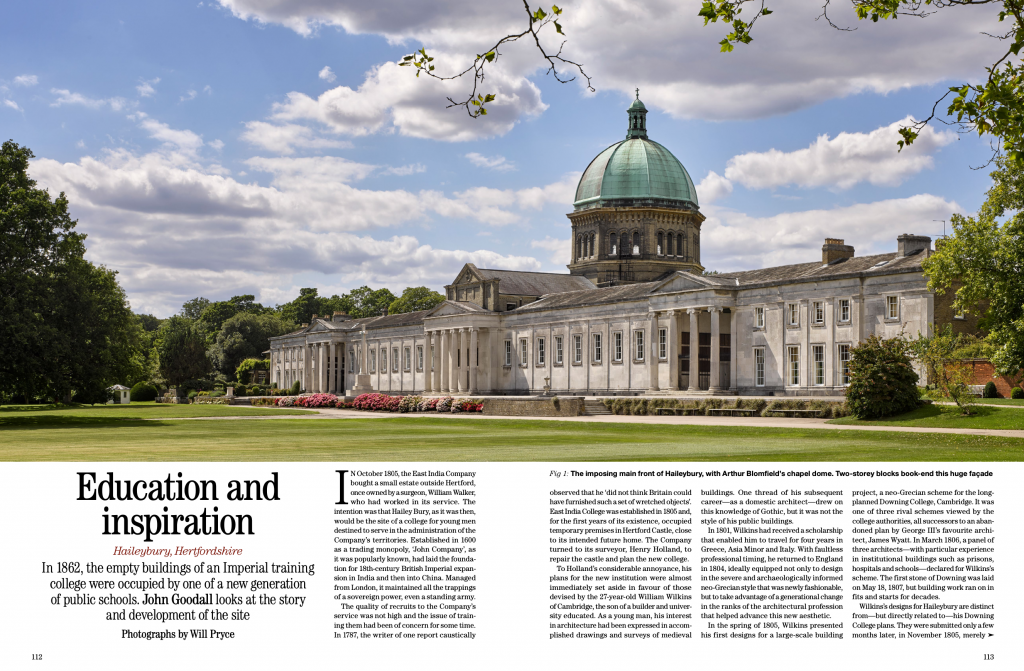 The first plans for Haileybury took place in 1805, by architect William Wilkins. Planned around a 360ft by 340ft courtyard, the Neo-Grecian style college was available for residence by 1809. Originally purchased by the East India Company, the intention was to provide education for boys aged 16-18; which they did for many years until final classes took place in 1857.

“East India College took up residence in 1809, offering a two-year course for 16- to 18-year-old boys, with a curriculum divided into two ‘departments’, one European— encompassing political economy, experimental philosophy, languages, maths and drawing—the other Oriental, with coverage of Persian as an administrative language, plus Islamic law, Hindu customs and Indian languages, including Sanskrit.” 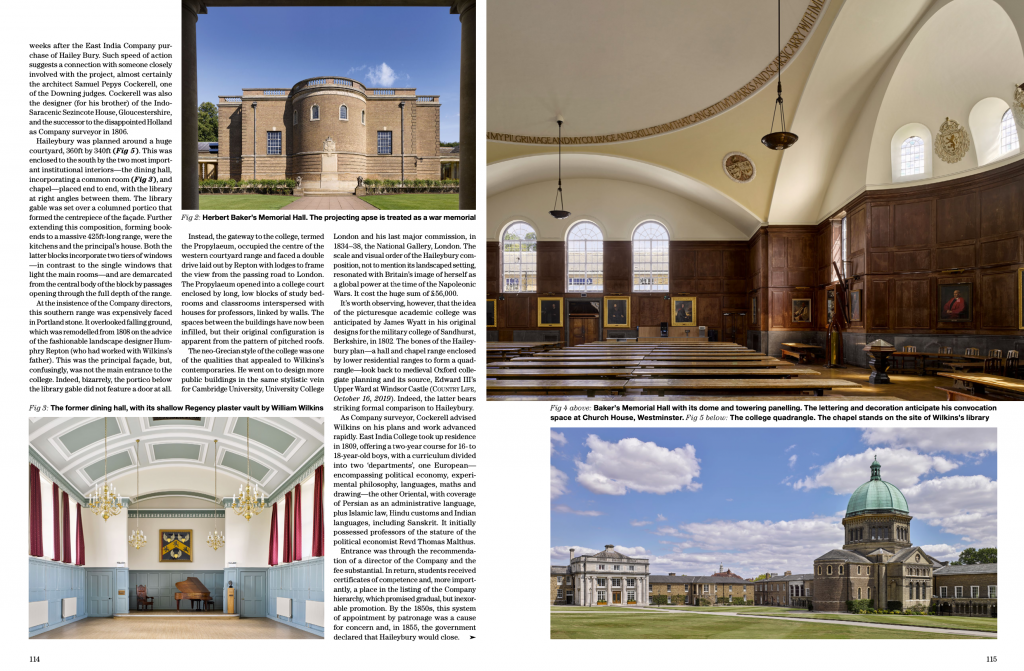 The inspiration for the buildings, was taken by Wilkins from a project by James Wyatt, from his designs in 1802 for the Military College of Sandhurst, Berkshire. The Chapel, followed by lower residential buildings, boasts similarities to Edward III’s Upper Ward at Windsor Castle.

“It’s worth observing, however, that the idea of the picturesque academic college was anticipated by James Wyatt in his original designs for the military college of Sandhurst, Berkshire, in 1802. The bones of the Haileybury plan—a hall and chapel range enclosed by lower residential ranges to form a quadrangle—look back to medieval Oxford collegiate planning and its source, Edward III’s Upper Ward at Windsor Castle (Country Life, October 16, 2019). Indeed, the latter bears striking formal comparison to Haileybury.” 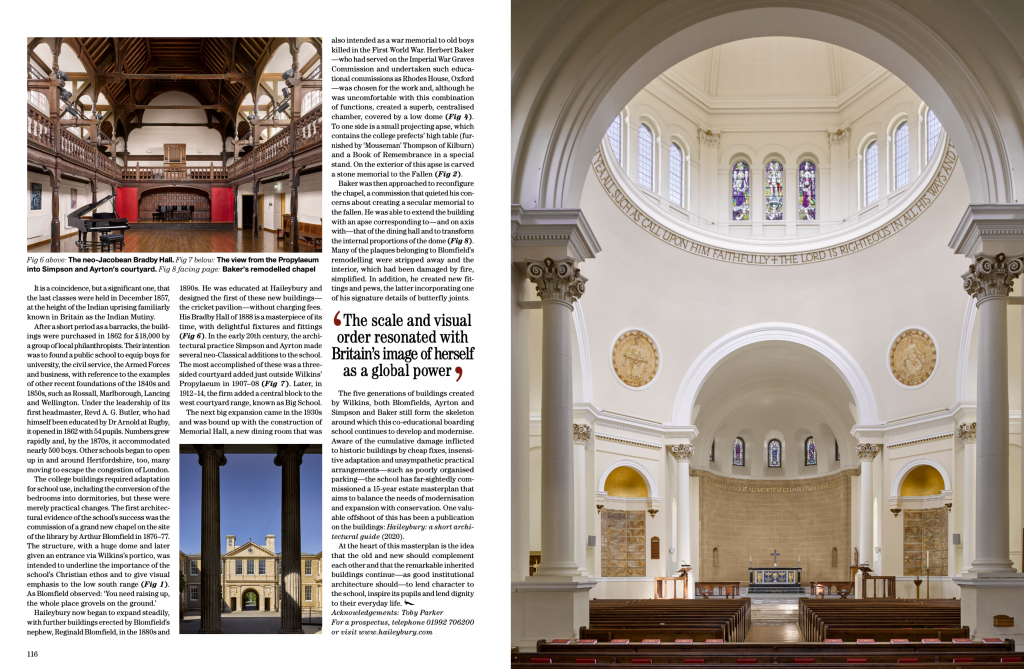 After the final classes in 1857, Haileybury was purchased by local philanthropists in 1862. Since then, the School has grown in all areas. From building expansions to the number of pupils, it has grown substantially over the years.