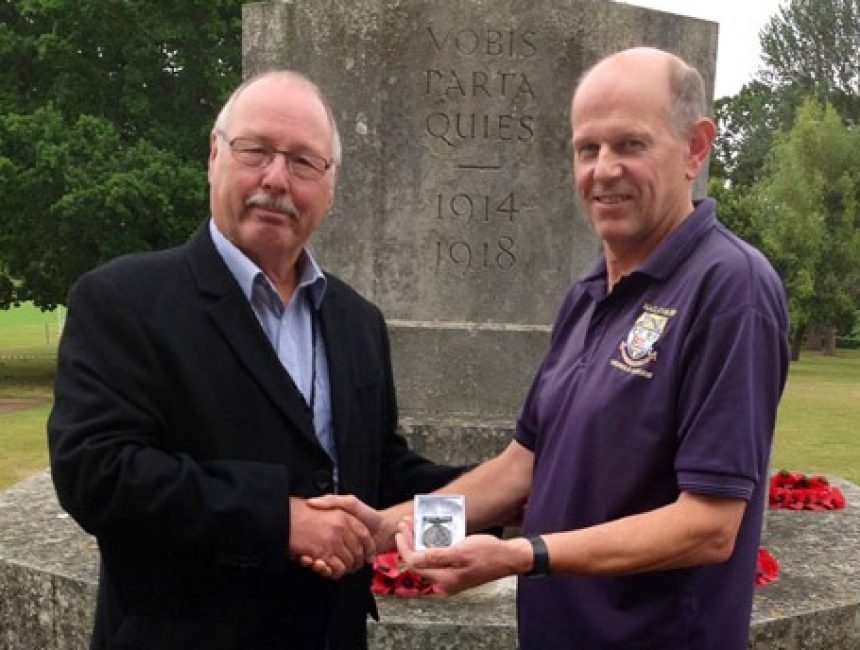 A medal from World War One has been reunited with a soldier’s grandson at Haileybury after a bottle collector discovered it among rubbish in an old refuge tip.

Terry, 65, from Reigate in Surrey, first discovered the silver British War Medal two years ago when digging for antiques in a quarry in Godalming, which was used as a tip in the 1920s.

When he retired last year he decided to clean the badly corroded medal and uncovered an inscription of the name A J Stedman, along with a service number.

Research discovered the medal belonged to Albert James Stedman, a Private in the Army Service Corps. The British War Medal was awarded to people in the armed forces who served in World War One.

Terry set out on a quest to reunite the missing medal with Albert's family and his search was featured in several newspaper articles, one of which was spotted by genealogist Jerry Poole who got in touch to see if he could help.

Terry discovered that Albert had lived in Godalming, Surrey, before he travelled to war in France in September 1915. As a Private in the Army Service Corps, Albert would have carried supplies to troops on the front line. He married his wife Florence while on leave in 1918. Albert survived the war and returned home in April 1919.

He also found that Albert had a grandson, Graham Perrin, 55, who was living in Hertford Heath, Hertfordshire. Armed with this new information, Terry phoned a local pub in the village to see if they knew of Graham.

They suggested he contacted Haileybury to see if he worked at the College.

Terry left a message with our receptionist and was thrilled when he received a phone call from Graham, Albert's grandson, who has looked after the College's grounds for 22 years.

Terry presented Albert's medal to Graham on behalf of the Perrin family on 13 July at Haileybury, in front of our war memorial.

Haileybury has strong connections to World War One as 589 men from the College who fought in the conflict died. The College also has a replica command trench in its grounds, which was built last year to mark the centenary of the Great War.

But just how Albert’s medal ended up in a refuge tip in Surrey still remains a mystery.

"Terry's message came completely out of the blue," says Graham. “I couldn't believe it. I was close to my grandfather, or Pop as I called him. It was actually because of him that I became interested in horticulture – I have fond memories of us gardening together.

"But, like many of his generation, he never spoke about what happened during the war. The things he would have seen must have been horrific. I didn't realise his medal was missing and how it got there is a mystery. Perhaps he threw away the medal to try and forgot about the war, or it might have just been accidentally mislaid.

"Terry has helped me to piece together my family's history and for that I am very grateful. It is nice to know that what my grandfather did won't be forgotten."

Terry says, "I was elated when I spoke to Graham and he confirmed he was Albert's grandson. I am so pleased I can finally reunite the medal with its rightful owner. Soldiers like Albert were unsung heroes – carrying much needed supplies to the front line while dodging bullets and bombs."