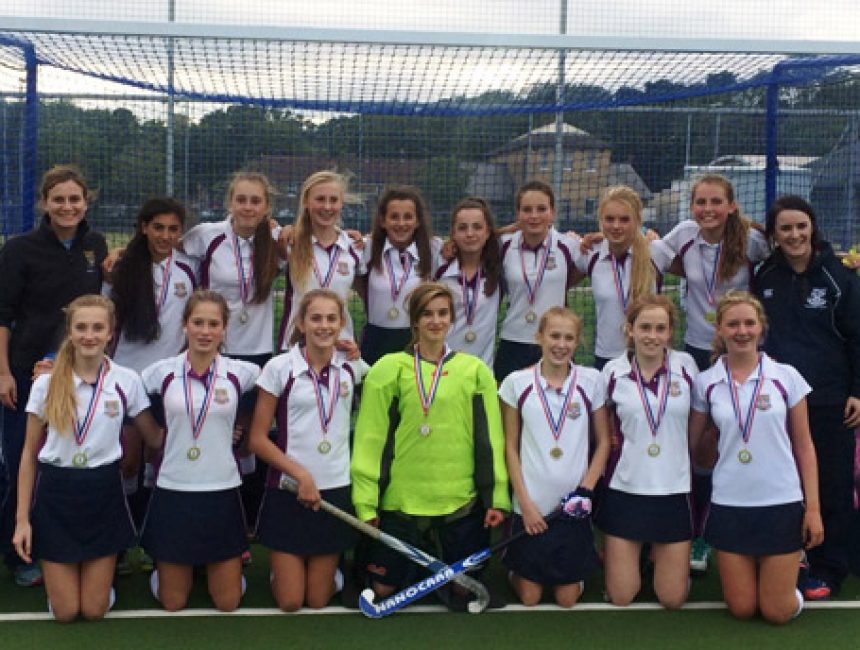 Haileybury started their quest for success in the Hertforshire County Tournament against a strong Aldenham School side. Juliet Kearey slotted the ball into the corner to put Haileybury onto the score board for the first of many goals of the tournament. The girls played with fluidity, passing the ball really well through the midfield. Lizzie Alliott finished off a super move making the final score of the first round 2-0 to Haileybury.

In the second round we were up against Queenswood School, whose great hockey reputation preceded them. Yet it did not appear to faze the girls who continued to make the ball do the work, stringing together excellent passes which resulted in us attacking for the majority of the game. Then came the first of what would be a number of short corners. The first goal was to come from Devon Pearce slotting the ball into the corner after superb interplay with Imogen Brace – a great training ground move! Not long after we were awarded our second short corner which Lizzie Alliott finished fantastically on the back post after a perfect injection. After continuous pressure in the attacking circle Lizzie Alliott was again on the back post to deflect in her second goal, to make it 3-0 to Haileybury.

Our final game of the group stages was against Parmiter’s School. After playing two outstanding games we were slow out of the starting blocks and this cost us greatly when we went 1-0 down. However, the girls were quick to respond and we were soon firing on all cylinders again. In defence Lucy Watkinson, Millie Brand, Siena Mehmet, Annabelle Edgley and Lizzie Alliott were whipping the ball around the back. After attacking down the channels, we crossed the ball in with Lili Newton tipping the ball into the back of the net. It ended 1-1.

Haileybury topped the pool and so we looked to face the runner up of group B in the semi-finals, which was Dame Alice Owen’s. They were a strong squad and in the first five minutes they brought the game to us, making our defence work hard. We regained our composure and there was an unbelievable work rate from our midfield of Imogen Brace, Sophia Bond, Devon Pearce, Alice Gallagher Boyden and Mackenzie Bates. Lili Newland was to get her name on the score board for a second time after she again sent the ball soaring into the back of the net. There was excellent movement from the forwards Amelia Gibbard, Juliet Kearey, Lizzie Hughes and Lili Newland. Alice Gallagher Boyden slapped the ball into the bottom corner to conclude the semi-final. The final score was 2-0 Haileybury.

We had made it to the final but now we were up against a fierce and determined Bishop’s Stortford College side. What a game it was! The tireless work rate was phenomenal with every girl giving everything they had left. Lizzie Hughes made superb runs up and down the line, as did Devon Pearce and Alice Gallagher Boyden in the centre and left hand side of the pitch respectively. Chances were had on both sides but neither converted leaving the final 0-0, even after five minutes of golden goal. Nothing could separate these two teams.

Now it came down to who could hold their nerve and see through the shuttles to the end. After losing the toss, Haileybury were first to take the shuttles. Lizzie Yarrow made some absolutely outstanding saves to keep us in the contest – nerves of steel! After the first five we were still equal 2-2.

Now it was sudden death, hearts were pounding, knees knocking and nerves frayed; the tension was rife. First up the Bishop’s Stortford forward made an excellent run and shot at goal, only for it to be saved by a phenomenal Lizzie Yarrow who was letting nothing in. Next Haileybury took their turn – saved as well! Miss Hillen and Miss Smith couldn’t cope with the intensity! Lizzie Yarrow made another incredible save to keep us in the contest. Then Lizzie Alliott stepped up to take her shuttle; cool calm and collected she went one way then another, round the keeper! Goal – Haileybury wins!