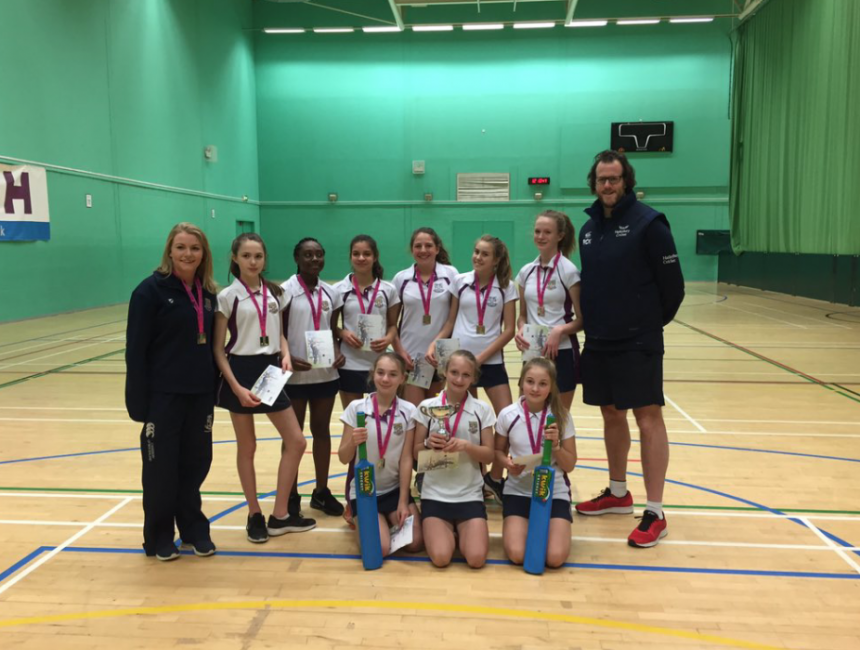 Our U13 girls’ cricket team were crowned county champions at the Lady Taverners Indoor Cricket competition which took place on Monday, 11 March at Hertfordshire Sports Village.

Nine of our Lower School 1 and 2 (Year 7 and 8) girls took part in the final, where they played against The Priory School, Ralph Sadlier and John Warner.

The girls won their first match by 22 runs thanks to the Captain Ruby and her teammate Tamara. Ruby continued her good form with the bat against Ralph Sadlier whilst Nayana bowled well in a 15 run win.

In a winner takes all final match against John Warner, our girls lost regular wickets but continued to run hard between the wickets and recovered quickly with Charlotte stepping up in the very first over by taking a hat trick and making it a triple wicket maiden. This marked a start from which the opposition never recovered, and Charlotte returned to close the innings out and secure victory for the team.

Director of Cricket, Rupes Kitzinger, was understandably delighted with the result: “The girls have been practicing with an excellent work ethic and have not only developed their core cricketing skills but they have responded to tactics and coaching with immediate effect. Our ability to bowl tight with very few extras, combined with our effective batting and running between the wickets has made it very hard for our opponents to play against us.”

The girls now go through to the Regional Finals which are being held at Middlesex’s Indoor Cricket Centre, Finchley at the end of April. We wish them the very best of luck!