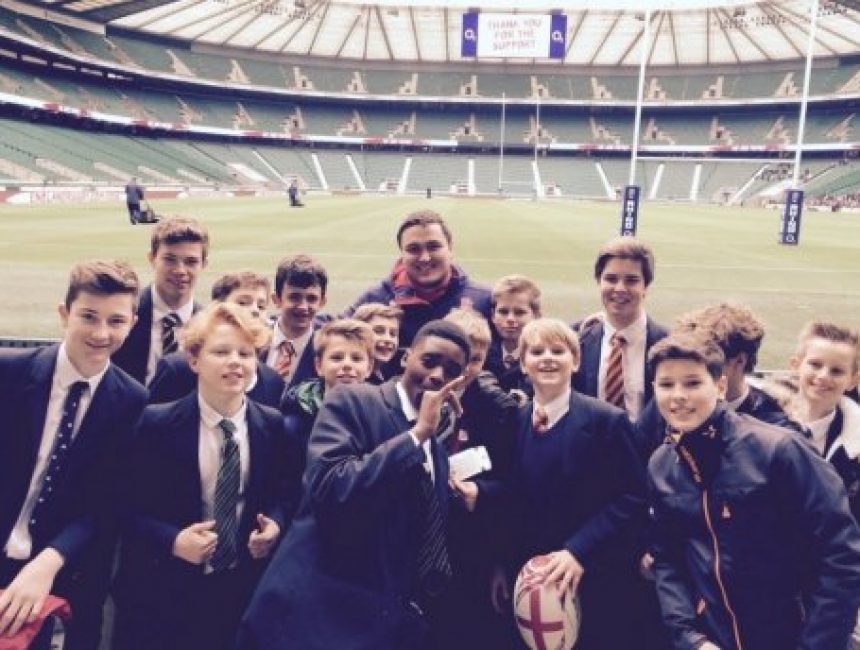 On Friday 29 January I luckily got the opportunity to visit Twickenham and watch the players train. This is a unique experience for anyone, but especially for me as I have never been to Twickenham before.

We left Haileybury at 8.00 am and travelled through London before reaching the home of rugby.Once we had arrived we went to the stalls outside the stadium and looked around just before walking into the astonishing stadium, which holds 82,000 people.

We all stared down at the pitch to see the players walking out as Eddie Jones, England’s head coach, talked about the team.

For the first part of the session the team played Walla Rugby, which is similar to Touch Rugby. We also saw the Props practice ‘rucks’, which is when the players push against each other to contest for the ball. After this we watched a short Rugby Union match which was one-sided to the ‘bibbed’ team.

It wasn’t until the end of the practice that we realised it was Eddie Jones’s birthday and we all sang happy birthday to him.

Unfortunately the training finished all too soon, and people gathered at the bottom of the stands for signatures. Luckily I managed to get three signatures from the team, including one from Old Haileyburian Jamie George, which I was incredibly happy about.

Most of us got autographs and pictures from Jamie George and Jack Nowell, some from Courtney Lawes and close-up pictures of the new captain, Dylan Hartley.

After having a great time, we got back on the bus, travelling through London, back to Haileybury. The trip to Twickenham was a fantastic experience that I will never forget, as I watched the England players train ahead of the crucial first game of the RBS Six Nations. A big thank you to Mr Owen and Mr Igolen-Robinson for the brilliant opportunity.

I learned a lot from trip watching different training drills and hope to put this into practice for Haileybury’s U13 A team. I really enjoyed the day and would love the opportunity to go again.