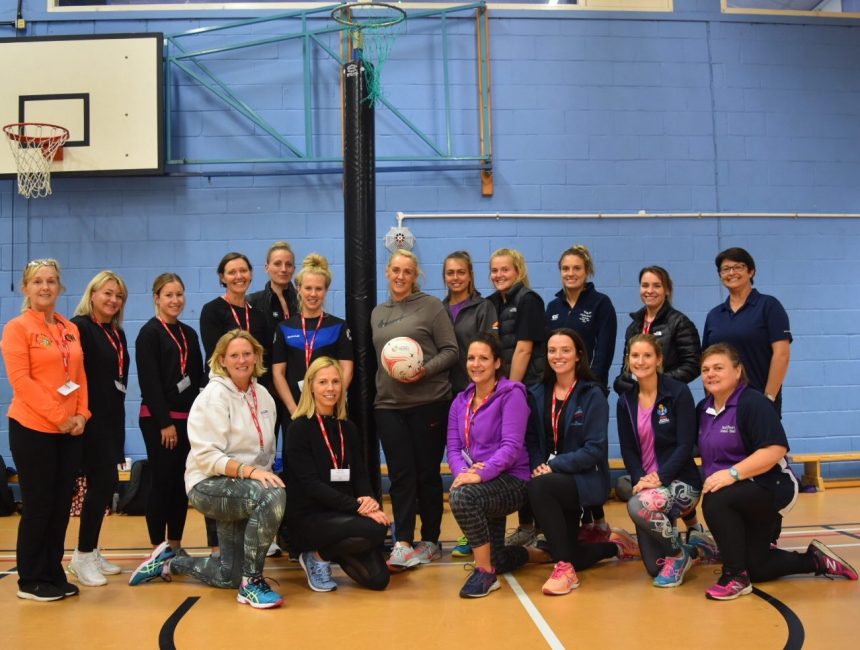 Tracey stepped down after leading the Roses to third place at this summer’s World Cup and last month revealed that she’s expecting her first child.

But speaking at Haileybury where she held a series of masterclasses for local coaches, Tracey said she’s looking forward to seeing the sport challenge the likes of swimming, football and tennis for popularity.

“The highlight of my career was winning the gold medal at the Commonewealth Games,” she said. “But it was also after that and the escalating effect it had on the rest of the nation – people getting into netball and the impact that we had.

“With the World Cup, we continued that journey and hopefully netball will become the most popular women’s sport in England.”

A group of 17 enjoyed a full day with the experienced coach who shared stories and strategies at the Haileybury Sports Complex.

She ran through some drills with the coaches and stressed the importance of playing sport at school.

“All the players that you play with at school, they’re not all going to reach England level so they are getting something different out of netball, something special. It’s about everyone getting involved and doing the best you possibly can.”

Tracey, who is the sister of former Manchester United footballers Gary and Phil, played 81 times for England before becoming head coach in 2015.

She described her four-year tenure as the “most inspirational time” of her life. And because of her personality, she says it was tough to step aside.

“I’m a very intense person,” the 42 year old said. “I have a very addictive personality so when I get in an environment, I never want to leave.

“But I think the passion and the enjoyment really gets across to my players. I need my players to show up and to be better than yesterday. My sessions are creative, they’re a lot of fun but I want them to work hard as well.”