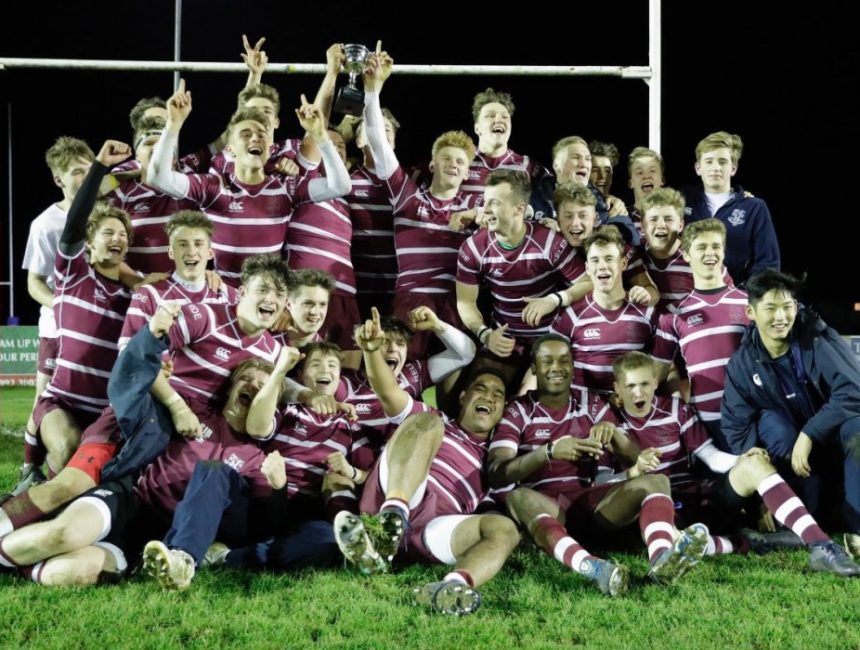 There was plenty of excitement at Hertford Rugby Club last night as the players in our 1st XV rugby team were crowned county champions for the third year in a row.

Playing against Watford Grammar School for Boys under floodlights and in front of a large crowd of supporters, the XV put on a spectacular display.

The final score was 59-10 to Haileybury.

This is the third year in a row the boys have won the title – last year they beat St Albans 24-21, and the previous year St Albans 24-0.

Here is the match report:

Haileybury made it three Hertfordshire County Cup triumphs in a row. They achieved this in spectacular style with a 59-10 victory over a spirited Watford Grammar School side. A superb first half display against the wind secured another victory for Haileybury at Hertford RFC who remain unbeaten at their local rugby club ground.

Some superb handling from the entire team saw tries come from flying wing Yunosuke S and powerful centre Jamie H saw Haileybury into a 14-0 lead after about ten minutes. With Sam C adding the extras and pulling the strings from fly half the champions were in danger of running away with it.

Watford played some great stuff and used the wind cleverly to put the pressure on from a possession and territorial point of view. Centre James C was man of the match for his superb defensive work early in the game which disrupted the Watford rhythm and it wasn't long before Matt C, Sam C and Martin P scored to give Haileybury a 35-0 lead. Watford pulled one back before half time to make it 35-5.

Haileybury made several changes but continued to up the pace and added tries from George H from a line-out, Luke B from some fine team play as well as scores from Kapelieli P and Miles F with Andrew N showing some great touches alongside two fine conversions. Watford added one score in the second half to make it a final score of 59-10 to Haileybury, who secured their status as three times champions of Hertfordshire at U18 level.