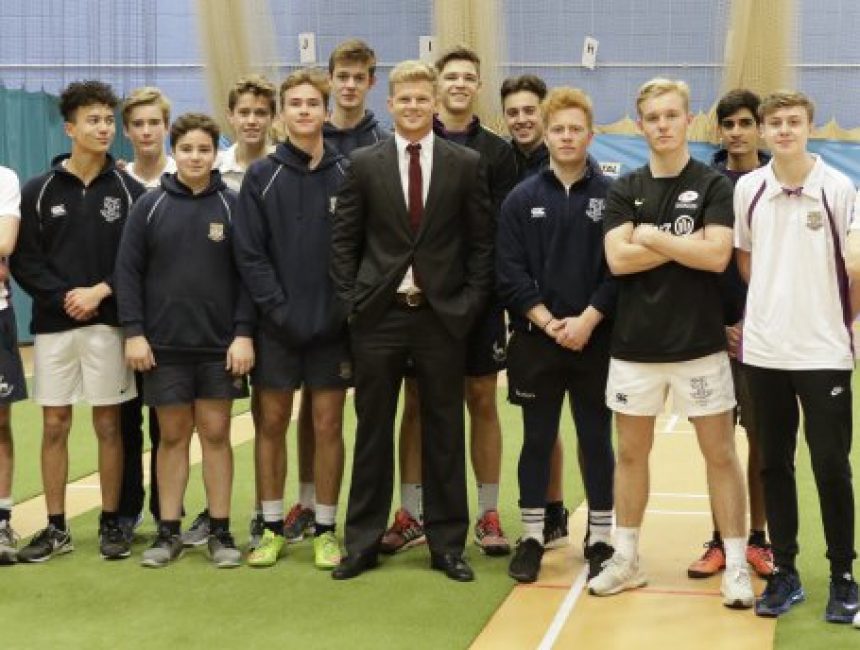 Scoring a century and “fantastic” cricket teas are some of England wicketkeeper-batsman Sam Billings’ fondest memories of his school days at Haileybury.

Sam (B Fr 04) took time out from his busy schedule preparing to play in Australia’s Big Bash League to take a trip down memory lane at his old school, which he described as “the best five years of my life.”

He took part in a question and answer session, where he was quizzed by pupils and former Dutch international cricketer Daan van Bunge, now Director of Cricket at Haileybury.

Sam talked about topics such as his cricketing hero AB de Villiers, his pre-game preparation, and keeping it as basic as possible: “the best players in the world do the basics better than anyone else.”

Sam was educated here at Haileybury, where he was a College Prefect. A boarder, he shared a room with his best friend and now England and Saracens’ rugby star Jamie George (LS & B Fr 02).

Since leaving the College in 2009, Sam went to Loughborough University and has gone on to play for Kent and England. As well as starring for the Sydney Sixers in Australia this month, in the New Year he will travel to India as part of the England one day and T20 squads.

Describing how it felt to be back at his old stomping ground Haileybury he said: “This school was the best five years of my life. Haileybury gave me an incredible opportunity to work as hard as I could. I remember getting a 100 here! It was a fantastic five years and playing on that ground and the setting you have here is phenomenal.”

He also gave the budding cricketers his top tips for success: “Just work harder than anyone else. The best players in the world work harder than anyone else, that’s just a simple fact. I was very blessed to have a great family environment around me; they were hugely supportive about my sport and unbelievably passionate about it. But the main thing is if you are willing to put in the hard work you’ll get to the top.”

Talking about when his love of cricket began, he said: “I started playing cricket at a very young age, three or four years old. As soon as I could walk I was playing every single sport I could. I played a lot of football, I played a lot of rugby (at Haileybury), and rackets. My cousin Tom (Billings (B Fr 04), who attended Haileybury at the same time as Sam), he’s now world number two at rackets, so I played that and it definitely helped my cricket.”

Sam made his England debut against New Zealand in 2015, and said that playing for his country has been his greatest achievement in his career so far, although he’s “not done yet!”

“It was always my ambition to play professional sport, to play at the top level,” he said. “To get the opportunity to represent your country at any level, even if it is U15s or U19s, it is a huge honour.”