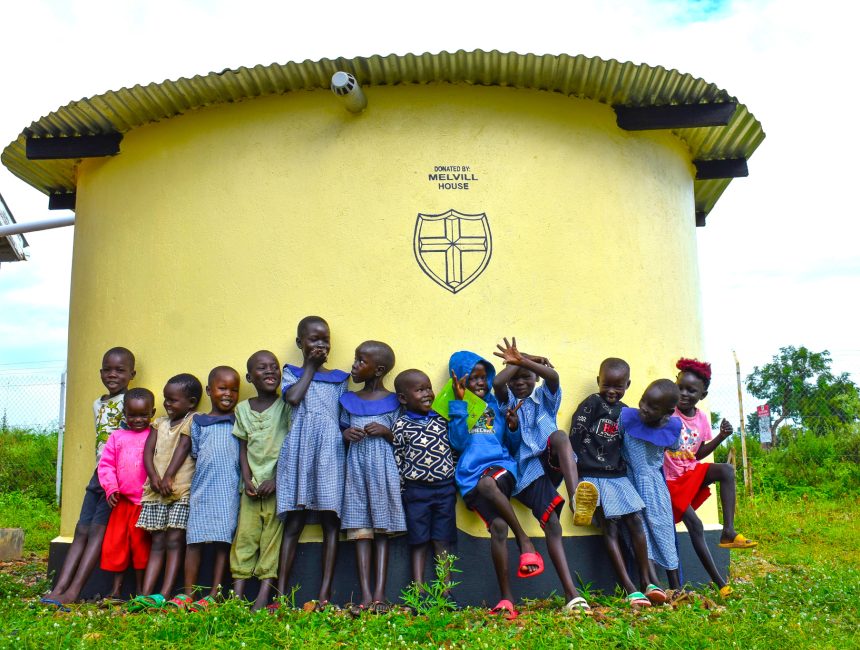 After a year of outstanding fundraising by the school community, Haileybury Youth Trust [HYT] has completed the first 20 rainwater tanks of its One Million Litres project in northern Uganda. Working in Africa’s largest refugee settlement, the award-winning charity is well on the way to meeting its goal of providing 65,000 children with one million litres of clean water in 50 refugee schools. 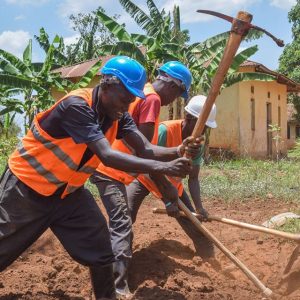 HYT’s climate-friendly technology and vocational training means that refugees and young Ugandans are given new skills in building, while at the same time transforming their communities, which are among some of the poorest in the world.

Haileybury’s Houses, the HPA, Lower School and parents combined last year to raise in excess of £30,000 towards the One Million Litres campaign. This sum was matched in turn with grants and a generous donation from a Haileybury family, reaching a total of nearly £80,000. Such generosity goes a long way in Bidibidi, home to 240,000 South Sudanese refugees in the world’s second largest settlement, where HYT is already improving lives and opportunities for thousands of young people.

Each Haileybury House has its logo painted on a water tank, in recognition of the support given to the One Million Litres campaign. David Lupai, the Headmaster of Ambia Primary School, a school of more than 2700 refugee children, told HYT: ‘The tank you have provided will help us keep kids in lessons instead of collecting water.’ Another Headteacher, Sanya Denis of New LIfe Nursery, added: ‘Our children no longer go thirsty. Thank you.’

HYT began life in 1890, working among the poor of the East End of London. It was here that the Haileybury old boy Clement Attlee saw poverty first hand – and where he worked as manager of the Haileybury Boys’ Club, as it was then, before the First World War.

A century later, it was a move to Uganda in East Africa that gave a new lease of life to Haileybury Youth Trust, promoting a unique climate-friendly building technology and developing vocational skills among some of the continent’s most vulnerable communities.

The charity’s work has been recognised internationally, including the Award of the Ashden International Award for Sustainable Buildings in 2017 and is highly regarded by the UN and both British and Ugandan Governments.

The film below about HYT’s work was made by the British High Commission in Uganda and shown at last year’s COP26 Conference in Glasgow.

A recent addition to HYT’s work is a reforestation scheme, where each school that receives a water tank, will also have several thousand saplings planted by HYT’s forester, which will give much-needed shade, fruit and firewood, helping enrich the depleted landscape too.

Haileybury has a long and important history of service: HYT and its predecessor have been alleviating poverty for over 120 years, firstly in the East End of London and now in East Africa. Our wonderful community rises to important challenges and our pupils learn much about our interconnected global world and how we all can, in our own ways, make it a better place for all of us to live in.

To keep fully updated with what’s happening with HYT