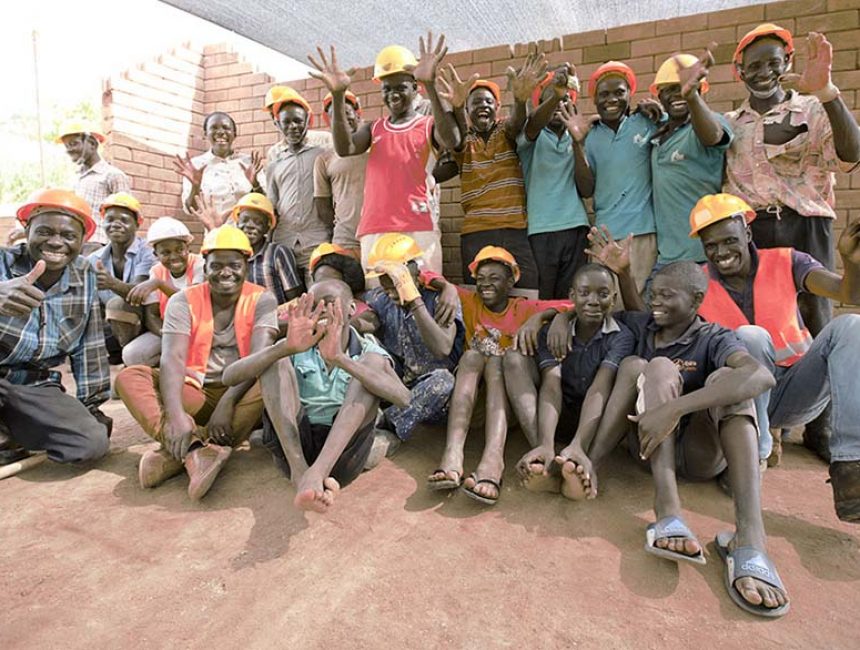 The school’s award-winning charity, Haileybury Youth Trust, today launches its One Million Litres campaign to raise £75,000, which will see the Uganda-based Trust install environmentally-friendly rainwater storage tanks in 50 schools in the refugee settlements of northern Uganda.

The project will be led by former pupil Ed Brett, HYT’s Area Manager for the Refugee Settlements. ‘This project will improve the health, lives, and educational opportunity for thousands of the world’s most marginalised young people,’ said Ed, who has been working for HYT since 2018. ‘And it will do so in a way that does not cost the earth,’ he added.

HYT, which had Clement Attlee as its manager when the Trust was located in London’s East End in the last century, has been working in Uganda since 2006. The charity is East Africa’s leading promoter of carbon-saving building and will use its innovative compressed earth technology to provide one million litres of clean water to more than 60,000 South Sudanese children living in Bidibidi, the world’s second-largest refugee settlement.

The charity was recognised in 2017 when it won the acclaimed Ashden International Award for Sustainable Buildings and has since constructed climate-friendly school buildings and water tanks throughout Uganda. HYT also trains young Ugandans and refugees how to build sustainably.

The One Million Litres campaign hopes to raise £75,000 to install the 50 water tanks over the coming year, which will also see dozens of refugees and Ugandans become builders themselves while working on this transformational project.

The British High Commission in Uganda recently made a film about HYT’s work, which was shown at the Cop 26 summit in Glasgow last week.

Russell Matcham, Director of the Trust said, ‘we have greatly valued the support of the Haileybury community through the years, and I am sure this campaign will be supported in the same way. It is brilliant for the pupils, staff and parents at Haileybury to be associated with such a life-enhancing environmental project.’’

For more information on HYT’s remarkable work in Uganda, and how to support the One Million Litres campaign, visit www.hytuganda.com