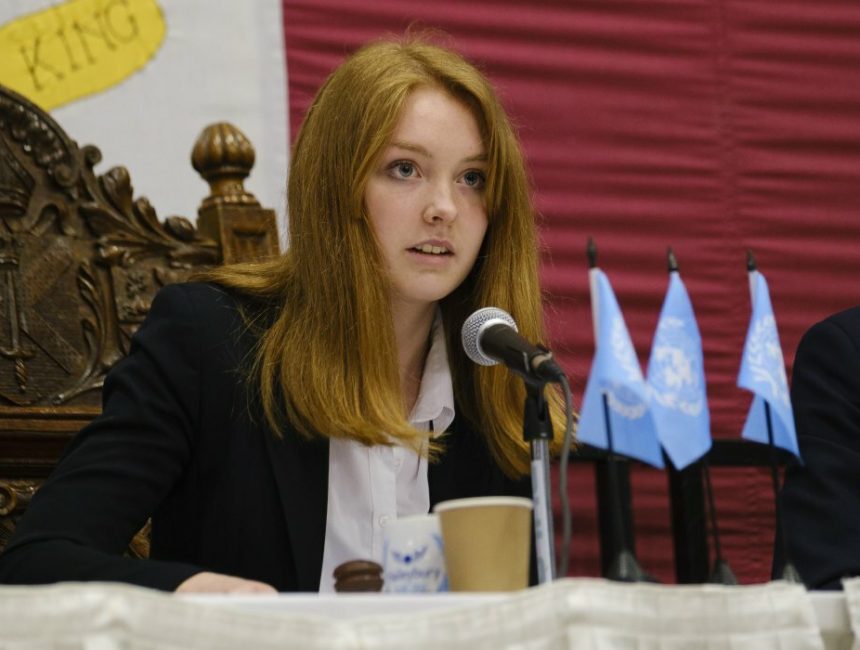 Once again, pupils from around the world visited Haileybury to take part in the annual Model United Nations Conference which took place from Friday 22 to Sunday 24 March.

The 25th Haileybury MUN Conference welcomed 860 pupils, the highest since inception. This was one of the largest and most prestigious such events in the country, with young people travelling from as nearby as Ware and Hoddesdon, and as far away as Jordan and Saudi Arabia.

On the Opening Ceremony of this year’s conference, the keynote speaker Michael Gifford, a British diplomat reflected on his international experience as an Ambassador invarious countries including UAE, Kazakhstan, Saudi Arabia and North Korea.

The theme of this year’s conference was “Making Progress?” This was chosen to reflect the fact that, while there are many areas where the international community has made great progress over the past few years, the world is also faced with seemingly interminable problems, as well as an array of new challenges and threats. Many of the topics being debated reflect both the positive and negative aspects of this theme, such as “The question of human rights surrounding neurotechnology”, “The question of the fall of globalism in MEDCs (More Economically Developed Countries)”, and “The question of the throwaway culture”.

Senior pupils took on a pivotal role in running the conference. This year’s Secretary-General, Alexander commented: “As the Secretary-General, it was my pleasure to lead the Secretariat which was full of bright and hardworking individuals. We have debated topics like trade barriers, money laundering and economic crisis in Venezuela. This was a crucial experience to learn about the world, current affairs and how international politics operate. It was also a wonderful opportunity to speak in public, learn crucial debating skills as well as researching skills that will be of much use later in life.”

The three-day Conference also included a team of pupils roving reporters producing daily editions of the ‘MUNdayTimes’ newspaper, an Act of Observance and a delegates’ disco.

For a summary video of this year's MUN Conference, please click here.

The newly ellected members of the Secretariat to lead the 2020 Haileybury MUN Conference are:

Head of Logistics – Morgan and Max