Haileybury celebrates 150 years of learning, leadership and the service of others - Haileybury

Haileybury celebrates 150 years of learning, leadership and the service of others 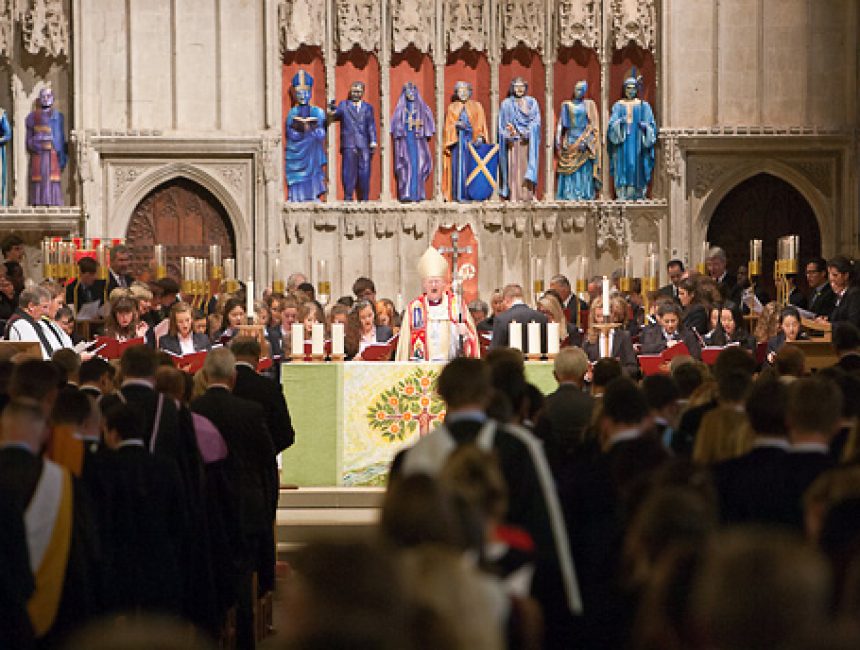 Haileybury celebrated its 150th year in style at the weekend with not one but three very special events, culminating in a thanksgiving service on Sunday at the Cathedral and Abbey Church of St Alban, involving the whole school.

The service was led by the Bishop of St Albans, the Right Reverend Dr Alan Smith. A congregation of over 750 pupils was joined by current teaching and support staff, Old Haileyburians and special guests including the Mayors of Broxbourne, Ware and Hertford. There were readings and contributions from every part of the school community, reflecting on the life of the College so far and the many achievements of Haileyburians over the years. Many of those present were astonished to learn, for example, that one of the earliest pupils of Haileybury became the first ever posthumous recipient of the Victoria Cross.

The Master, Joe Davies, led the congregation in an act of dedication, the theme of which was learning for life, leadership, self-sacrifice and the service of others as well as "using our learning to help shape a future in which all can flourish."

Mr Davies said, "We have had a wonderful weekend of celebrating Haileybury's 150th Anniversary. We have seen former pupils, former staff, current pupils and current staff joining together in expressing their joy at being part of such a strong community, united by common values and by a commitment to education and service in the world beyond school."

Friday (21 September) saw the official launch of a new commemorative book, Haileybury: A 150th Anniversary Portrait, edited by the school's own Roger Woodburn and Toby Parker. The book has drawn on Haileybury's extensive archive and is filled with fascinating details and images concerning the history of the school, its buildings, staff and pupils, providing an insight into how its traditions and values continue into the 21st century.

The College was delighted to host a reunion of over 350 Old Haileyburians and staff along with their partners on Saturday. The visitors were invited to attend a 150th anniversary service in the Chapel during which the dedication of two new stained-glass windows also took place. The windows were designed by local stained glass designers and conservators Mongoose Stained Glass and their commission and installation was possible thanks to a generous gift from the Haileybury Society. The intricate and colourful designs of the windows incorporate a multitude of images representing Haileybury's past and present. They are a stunning addition to the Chapel and a perfect way of marking this important milestone in the school's history.

The Chapel service was followed by a Sesquicentennial Lunch and the opportunity for OHs to take a tour of the school and see recent developments, such as the new Modern Languages Building and the new Grubber. Many also visited the Archive Exhibition currently on display in the Library as part of the 150th anniversary celebrations. The Exhibition will be open until Tuesday (25 September).

To order your copy of Haileybury: A 150th Anniversary Portrait, please contact the Haileybury Society at hailsoc@haileybury.com