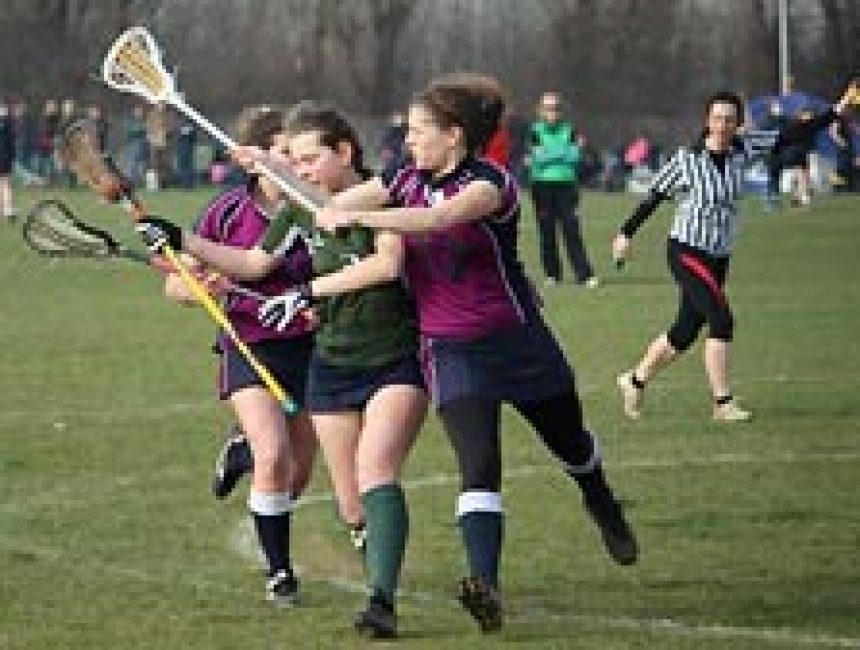 On 2 and 3 March the Haileybury 1st lacrosse team travelled to Imperial College London for the National Schools Lacrosse Tournament. Fifty two schools were at the venue and, having been placed in the wrong tournament last year, we were the underdogs as we were placed in the bottom seeding of our pool.

Our first match was against one of the tournament favourites and top seed, St Catherine's. We started well and made St Catherine's work hard for their goals. Hannah Mullee scored from a very tricky angle to make the score 4-1 to St Catherine's.

With a win against RGS Worcester and a loss versus Caterham we really needed another win, but our next opposition was Sherborne, a good lacrosse school and also the winners of Division 2 last year. We got off to an early lead with goals from Alana Zukas and Chloe Allen, but Sherborne began to creep back. Sophie Adams scored another to confirm the 3-2 win.

Next was a local derby versus St George's and, having lost to them narrowly previously in the season, we knew that they were beatable. Unfortunately, their 6ft GK managed to keep out our goals apart from Beth Nutt's, which left the score 4-1 to St George's.

Our final match ended in a 4-2 loss against Harrogate Ladies College, leaving us in 5th place in our pool which was nothing to be disappointed about as all our games were so close.

On the Saturday we were placed in the upper section of division 2 along with some tough opponents. We started strong versus the Royal School and won 5-2. St Helen's scored an early goal and managed to keep us from scoring in the first half. The minutes were ticking away in the second half but the girls didn't give up and managed to score two late goals, making it a 2-1 win.

Rencomb, a school from Gloucestershire, had a very energised team with a few international players. It was very fast paced match and we came away with a 3-all draw.

Kings's Canterbury were looking strong, but we started well, displaying some amazing team goals which gave us a 3-0 lead at half time. In the second half, we began to slack and the final score was 3-2.

Two more matches to go. Fettes were next. It was 0-0 at half time with both teams eager to score goals. Unfortunately, we weren't the lucky ones and the final score was 0-1.

The last match of the day was against Sherborne, whom we had beaten the day before, but they had been causing upsets all day. They started strong. We needed to win or draw for the points as we were one point behind Rendcomb. Our determination was inspirational, but several goal chances were stolen from us and the final score was 5-2 to Sherborne.

We missed out on the semi-finals by 1 point which placed us 3rd in our division. It was a great two days of lacrosse filled with wins, losses, great team and individual play as well as inevitable mistakes. We will return next year just as determined. Well done to every girl who participated.