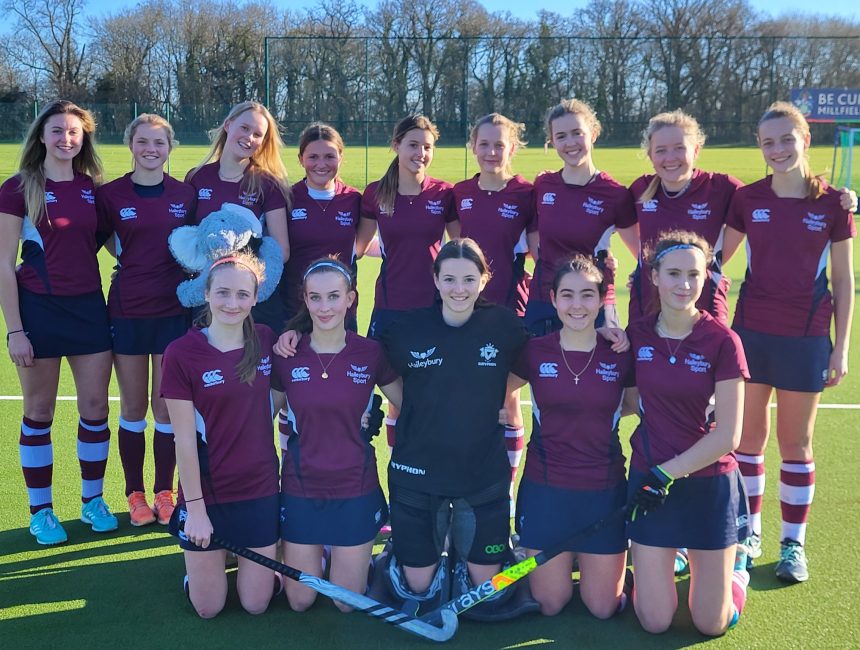 On Thursday 19 January 2023, the Haileybury Girls Hockey 1st XI completed a momentous victory over Millfield School, earning them a place at this year’s National Finals day at the Olympic Park.

Having had one of the most successful hockey seasons in Haileybury history before the Christmas break, the girls entered the new year with one fixture at the forefront of their mind – a national quarter final against Millfield School. On the returning from the festive break, the squad was put through their paces by Mr Schilling to get them back where they left off. Following the two weeks of intense training the team had completed their final preparations and departed for the southwest on Wednesday evening. There was an air of excitement, anticipation and nervousness around the task which awaited them. Millfield, a dominant force in school hockey, were unbeaten in their 2022/23 campaign so far. However, Haileybury got the pre-match preparation just right with captain Bethan, creating a very enjoyable musical bingo quiz for the team and coaches to partake in on the long bus journey there. We arrived in Somerset to conditions similar to the ones we had left in Hertfordshire – very cold and very icy. Could the game in fact be called off? It was already late and with the next day’s performance in mind, the team headed straight to bed to ensure they were well rested for what lay ahead. When we awoke to a scene of white hills and icy walkways, it was still unclear whether the game would in fact be able to go ahead. However, breakfast was first on the agenda and after a healthy feed, the team departed for Millfield. On arrival at the school, we were directed to their 1st XI pitch which, similarly to the hills, was frozen white. Fortunately, Millfield boasts another two water based pitches, the second of which was deemed fit to play. The game was on. Having continued to prepare with the utmost professionalism, guided by the exemplary leadership of Bethan and her vice-captains, the team gathered together for one final team talk before taking to the field. 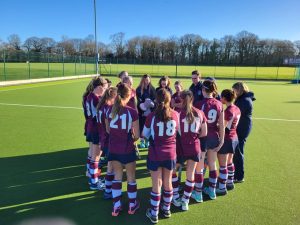 The game got off to a fast start, with Haileybury soaking up vast amounts of Millfield pressure. The cool and calm head of Charlotte orchestrated the back line superbly. The girls found themselves challenged against a well drilled defensive press and a creative out-letting system on display by the hosts. The girls continued to play with tenacity, grit and composure, winning key moments and in the 29th minute, after two re-award penalty corners, Maddie broke the deadlock, guiding home a well worked penalty corner routine to give the visitors the lead. Half-time followed swiftly after which gave both teams a much needed rest and opportunity to take stock.

The second half showed no let off in pace with both sides raising their standards. Only five minutes into the second half saw Haileybury double their lead. A quickly taken sideline, deep in Millfield’s 25, caught them off guard and allowed Millie to jump in front of her defender and lift the ball over the keeper to make the score line 2-0. Haileybury controlled the next ten minutes with a maturity they had not yet shown this season. The midfield engine of Millie, Ruby  and Bethan showed no sign of tiring as the game continued to gather pace. The girls were highly disciplined in defence and meticulous in their attack. Millfield resurged into the game with around twenty minutes left to play, scoring a fast right hand side attack from six yards out. The game was alive. The maturity of the visitors prevailed, underpinned by some heroic saves from Philipa between the posts, ruthless penalty corner defence and some exceptionally composed out-letting from the back line. The remaining time was played out to leave the score at 2-1 to Haileybury on the final whistle. What a game. The girls had displayed hockey beyond their years and pulled together a remarkable performance to deservedly earn them a place at the National Finals day at the Olympic Park. What a day.

“What an immense effort from everyone on the pitch. Just thinking about the game gives me goose bumps! There was not one person who didn’t fight for the win – it was incredible to see our Haileybury team step up against competition like Millfield and come out triumphant after what felt like a continual 70 minutes of defending. The maturity shown on the pitch by every single girl was reflected in the way we played, with calm heads and clinical finishing. Our focus now shifts to the semi-finals where we will put in an equally incredible performance and continue to write Haileybury’s history!” – Bethan, Upper Sixth & 1st XI Captain

“It was incredible to see how every member of the team stepped up against a physically and technically strong opposition. Everyone worked tirelessly for the duration of the game, all inspired by the fact that we were playing some of the best hockey of our season. In particular I think credit is owed to our defence, who out-letted confidently and consistently against a well-drilled opposition, maintaining their calmness throughout.” – Maddie, Upper Sixth & 1st XI Vice-Captain and goal scorer