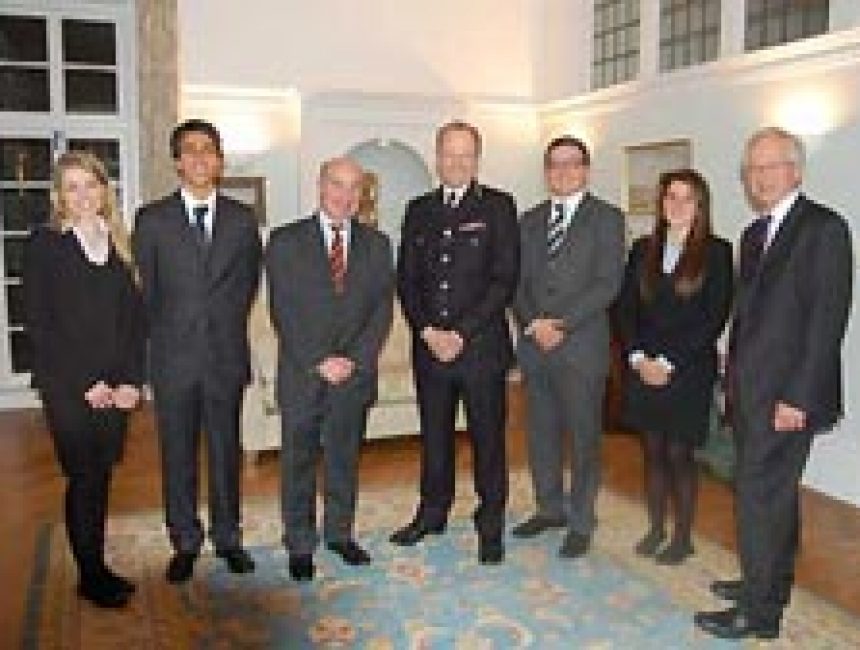 Upper Sixth pupil, Stefanie Nacke (Aby), reports on Sir Hugh Orde's lecture, entitled "Britain after the riots: where should policing go from here?" The lecture was the first in a series of events to celebrate Haileybury's 150th anniversary year.

On Thursday, 23 February a mixed audience of pupils, teachers, parents and members of the community gathered in Big School at 7.30pm to welcome Sir Hugh Orde, President of the Association of Chief Police Officers.

"Talking to the next generation of leaders of the country", Sir Hugh provided an insight into the complexity of a 20th century police system struggling to keep pace with the rapidly evolving 21st century challenges such as the riots of summer 2011. The essence of his talk was that in a country with a long history of periodic disorder, it is crucial to distinguish between the changes which need to be made to the structure of the police force and changes in the approach to policing. The British police force uses a minimum amount of force to carry out its duties and, according to Sir Hugh, this should not be changed as – even though the structure of this system is imperfect – the British approach is respected across the world.

A focal point of his speech was that the authorities must not overreact or panic when confronted with challenges such as the riots or even terrorism. This reaction is exactly what the perpetrators are expecting and responding in an uncoordinated way will only enhance confrontation. Even though Sir Hugh created a complex picture of how problems within the police could be approached, he is aware of the unrealistic expectations of some sectors of society: our huge appetite for information is one vital factor in the image of the police force and we ought to be aware of the fact that we are the media's audience, responding to events and creating the police's reputation.

Furthermore, Sir Hugh emphasised that re-engagement with the community in an entirely peaceful way is the only way to success. Resulting from his experiences in Northern Ireland where he successfully restructured the police force, he accentuated the importance of a legitimate police service which "puts people in prison, not in hospital". However, apart from engagement with the citizens themselves, he believes a restructuring of the British police force as a whole is needed, in order to provide enough resources to be moved quickly around the country.

In addition to his vision of a restructured police force which will ensure national security, Sir Hugh placed emphasis on the fact that policing is a very complex business and we have to try to resist the temptation of focusing exclusively on issues at the national level as the local level provides the foundation of our nation.

When taking questions at the end of the lecture, Sir Hugh admitted that the response to the riots of 2011 was not perfect but the best one which could be given on the basis of the resources available. He realised that citizens are often more realistic about the situation than politicians are, which again credits the current approach of interaction with the community to improve the security of our country.

As a Haileybury pupil, I took away from this evening the concept that policing is a local function and that it is of monumental importance that all citizens engage collectively in the protection of our country. Moreover, we have to realise that it is not a solution to fight against someone whose approach one is unable to understand, which is best explained by an example Sir Hugh himself provided. The conclusion of an international conference of police forces last year concerning gangs was that policing gangs out is impossible. The police, but even more so, each and every one of us, have to confront the situation and engage in talks with the gangs themselves.

For me and I guess for us all, the answer to the question "where does policing go from here?" is that, even though structural changes have to be made, the basic approach should not change. Policing must remain the protection of the citizens. At the end of the evening, we realised that each and every one of us has the potential of bringing about a change in our society by individual engagement and collective confrontation of the dangers with which we are faced.