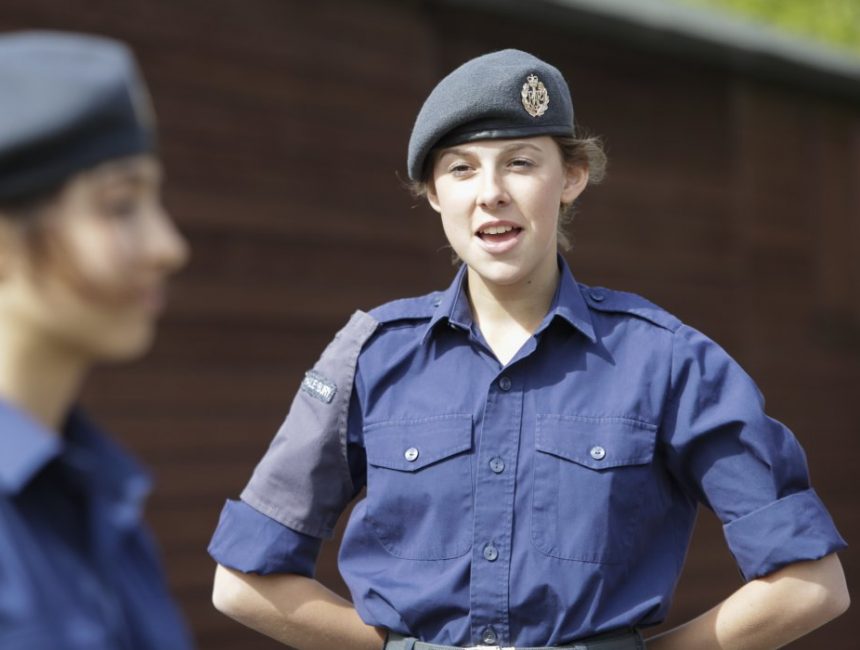 Our Combined Cadet Force (CCF) received its ‘Biennial General Inspection’ last week. This inspection is a requirement from the Ministry of Defence that all cadet organisations undergo, every two years.

Our inspecting officer this year was Colonel Every (Royal Artillery). Colonel Every received a presentation and held meetings about our contingent during the morning, before observing cadets undertaking their training during the afternoon. Here he watched Army Middles conducting command tasks, practicing weapon handling and then conducting a ‘log run’, before seeing the Army Fifths complete a ‘march and shoot’ competition; during this the Colonel entered the range to assess the cadets’ marksmanship.

From here he moved out to Hailey Field to observe the Royal Navy (RN) Fifths using semaphore, radios and Morse code, as part of a communication exercise and then saw the RN Middles, building a ‘resupply tower’ with ropes and large telegraph poles. Next, it was onto the Royal Air Force (RAF), where some Sixth Form Non-Commissioned Officers (NCOs) were leading drill lessons and other command tasks, whilst still other RAF cadets were conducting archery and using our cutting-edge (but homemade) flight simulator.

The Colonel was clearly impressed by what he saw and heard. As well as liking the training activities, he described the quality of conversation he had enjoyed with our Sixth Form cadets in glowing terms; indeed our NCOs were superb ambassadors for our Contingent (and our school) throughout the day.

As Colonel Every reminded us during the mess dinner in the Common Room later that evening, Haileybury CCF has an excellent reputation amongst the cadet movement. Indeed, we have a proud and rich history, which the cadets and officers remember whenever they put on their service uniform. The cadets are also lucky to be able to participate in as diverse a set of training activities as they do, across all three services.

The CCF is not, as some think, a recruiting tool for the military. Whilst it does help inform those cadets who want to know more about a military career, this is not the primary aim of the organisation. Instead, Haileybury CCF’s “mission” is to provide our cadets with unique, exciting and challenging activities, so as to help develop character. Teamwork, leadership and resilience are the types of characteristics that CCF training strives to foster. These are attributes that will serve the cadets well, whatever they do beyond Haileybury.